ORDERING FOOD IN A RESTAURANT

A: Good evening, can I get you a drink?

A: Would you like to order anything off the appetizer menu?

B: Let’s see, can I get some fried zucchini, please?

A: No problem, call me when you’re ready to place the rest of your order.

B: I would like to order my food now.

A: What did you want to order?

B: Can I get a cheeseburger and some fries?

A: Can I get you anything else? 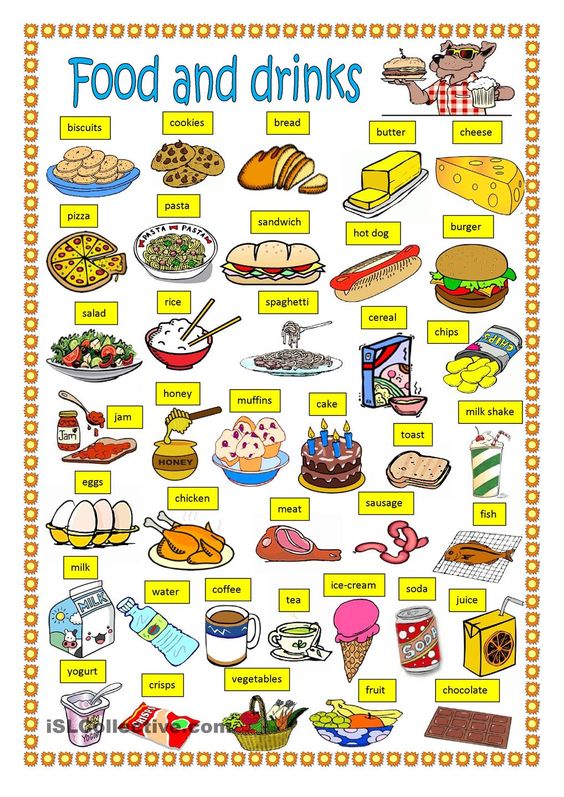 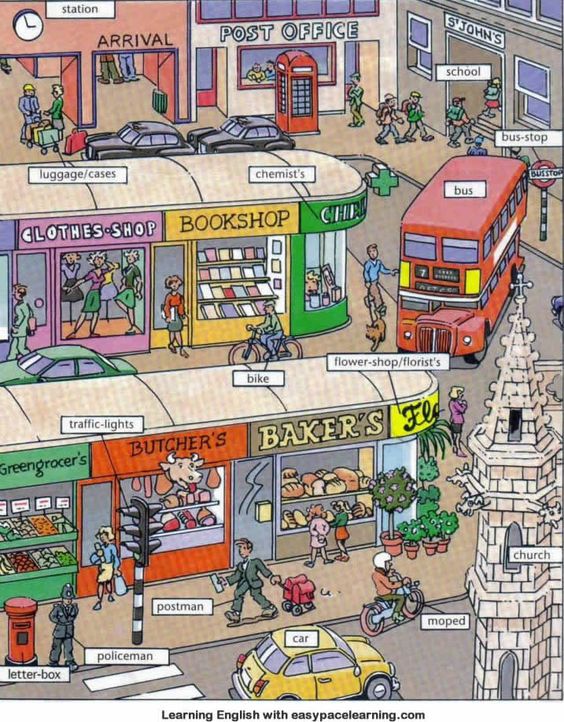 This is the centre of my town. Look! There is a butcher’s between the baker’s and the greengrocer’s. The florist’s is next to the baker’s. There is a traffic lights just in front of the butcher’s. My school is near the station, opposite the chemist’s. It’s half past eight in the morning and the children are going to school. The shops are open. There is a clothes shop next to the bookshop, it’s where my mother works. Behind the clothes shop there is the station.

PLACES IN A TOWN

PLACES IN A TOWN – ANSWER TO THE QUESTIONS

There was once a mother duck.  This mother duck had no children yet for none of her eggs had hatched. She waited patiently day and night for her babies to hatch. At last, the eggs began to crack.

One by one, yellow ducklings stepped out of their shells.

But one large egg was still in the nest. The next day, the big egg started to hatch.  Out came a baby boy bird. This bird was much bigger than others. He was not yellow at all. He was dark-gray from his head to his feet.  And he walked with a funny wobble.

One of the yellow ducklings: “What is THAT? He can’t be one of us!”

Another yellow duckling: “I have never seen such an ugly duckling!”.

Mama Duck: “How can you say such a thing? You are only one day old! Be nice! Let’s go to the lake altogether now.”

When they left the water and started to play, the Ugly Duckling tried to play with his brothers and sisters, too.

The other ducklings: “Go away! We will not play with you! You are ugly. And you walk weird, too!”

One of the yellow ducklings: “You know what? Please, go away from here!

The Ugly Duckling: “You are right. I should go.” 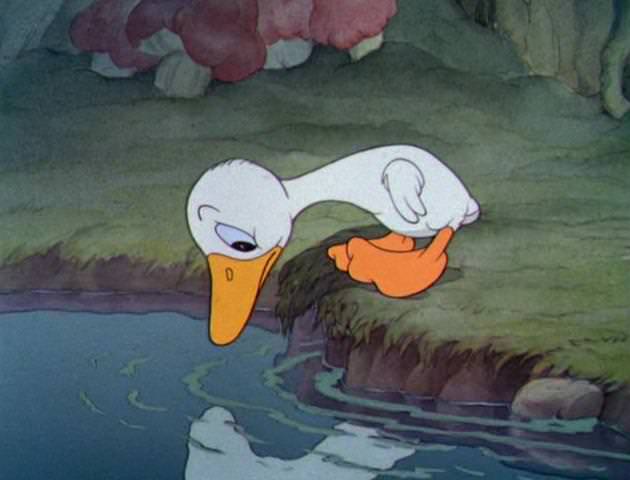 During the way the Ugly Duckling meets two grown-up ducks.

The Ugly Duckling: “Can I please stay here for a while? I have nowhere to be”

The Ugly Duckling: “Brrr! If only there was a place I could get dry.

But… There is a light blinking in the wood! This is a house!

Old woman: “What is all this noise! Ah, it’s a duck! You can stay here, but only if you lay eggs.”

A tomcat and a hen: “Who do you think you are, coming in here and taking up room by the fire!”

The hen: “I don’t need anyone else in this hut laying eggs!”

The Ugly Duckling: “Don’t worry about that, I am a boy duck.”

The tomcat: “Then why are you still here? Didn’t you hear what the old woman said?”

The tomcat: Get out! Get out!

The door was still a bit open, so our poor Ugly Duckling slipped out the door, and back into the storm.

The Ugly Duckling: “No one ever wants me and I am so tired”.

Winter came, setting a blanket of white snow all over.

The cold wind and the dark clouds made the Ugly Duckling feel even more sad. But suddenly two giant hands swept him up.

A farmer:  “You can come to my house and stay with me for the rest of the winter. Then, when spring will come, you’ll go to the lake to swim again, as you were born to do.”

The winter ended. One day the farmer took the duckling back to the lake where he had found him, and set him with care on the water.

The Ugly Duckling: “Gosh, I feel strong, I never felt as strong as I do right now!”

He heard quiet splashing sounds behind him, and turned around.  There were the most beautiful birds he had ever seen!

The Ugly Duckling: “Don’t worry! I will go now. I will not make trouble for you.”

One of the beautiful birds: “Why are you going so soon? Stay here, with us! We’ll be great friends.”

Another beautiful bird: “Come with us! Take the lead!”

All his new friends flapped their wings behind him.

The Ugly Duckling: “Say!  Who’s an ugly duckling now? Surely, not I!

HOMES IN THE UK 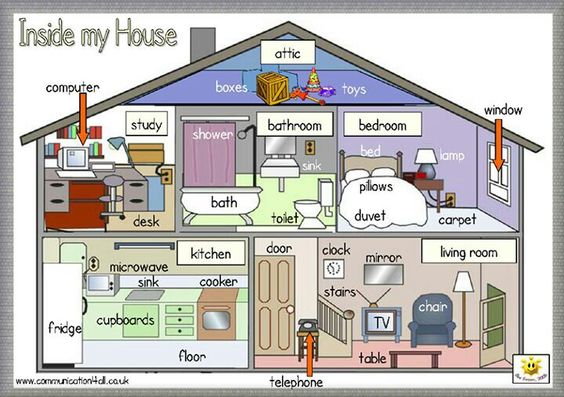 LISTEN
In the UK, 82% of homes are houses and 17% are flats. There are lots of different types of houses.

Flats are usually in a block (a block of flats is a building with four or more floors / storeys) or they are converted from old houses. For example, you can find a flat above a shop.

Some people also live in a bungalow: a one-storey house.

A house is often on two or more floors. On the ground floor (or downstairs) there’s usually a hall (where you go in) and then other rooms, such as kitchen and living room. On the first floor (or upstairs) there are usually bedrooms and a bathroom.

In some houses there is also an attic or loft – a room under the roof. Some houses have a garage attached (for the car), and often there is a garden: a front garden (in front of the house) and a back garden (behind the house).

Other rooms are a dining room (either part of the kitchen or a separate room) for eating meals, a utility room (where you can find the washing machine, etc), a study (where there is a desk and computer). In bigger houses there is more than one bathroom. Some bedrooms can have “ensuite” bathrooms, and there is often an extra toilet (or “loo”) downstairs.

In the bedroom you can find one or more beds. Small beds (for one person) are single beds, while larger beds (for two people) are double beds. If children share a room, they often sleep in bunk beds – one bed above the other, which a child can reach with a ladder. Other furniture in a bedroom is a wardrobe (where you hang clothes such as coats, trousers, skirts and dresses) and a chest of drawers, where you put smaller items like underwear, T-shirts, jumpers, etc.

Here are some of the things you can find in a kitchen: a kitchen table and chairs, kitchen cupboards (for storage) at eye level fixed to the wall, or at floor level; a fridge and perhaps a freezer;  a cooker which consists of an oven (for cooking roast meat, or baking cakes, etc) and a hob (four or five rings for cooking pasta etc); a sink (for washing plates, washing vegetables etc); work surfaces (for preparing food); a dishwasher (machine to wash plates). 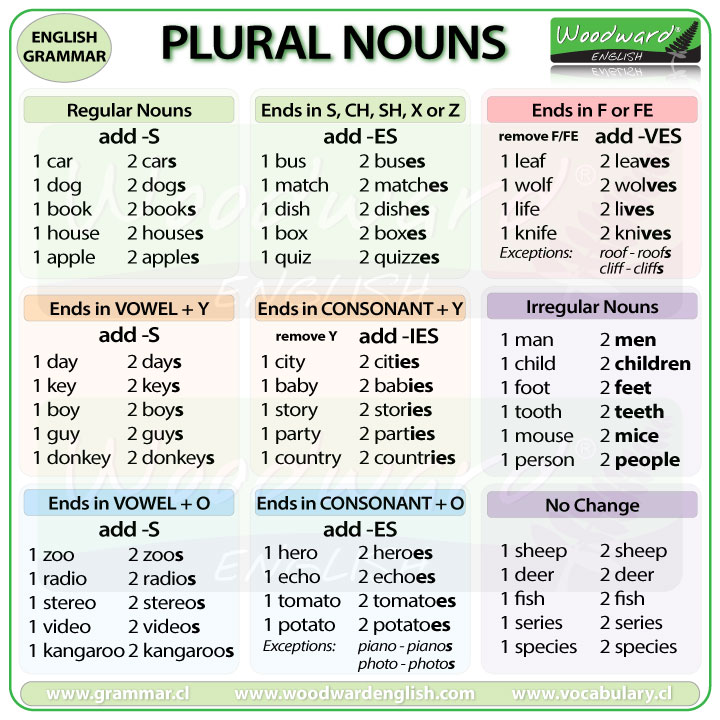 LISTEN TO THE STORY

Everyone dies, sooner or later. It is natural. It is the First Law of the jungle.

Shere Khan, the great tiger, killed them because he was angry and they were alone in the jungle.

Hungry animals kill. This is the Second Law of the jungle.

Before they died, the man and the woman used fire against Shere Khan. They burned his paw and Shere Khan was angry. He went away because he was frightened of the fire. In her home, a Mother Wolf gave her milk to her cubs. She heard a noise, outside, but she couldn’t move.

A mother protects her cubs. This is the Third Law of the jungle.

Father Wolf went outside. He saw the fire, the man and the woman. Then he saw a baby as small as the wolf cubs, a man-cub. He had no mother. “I can call him Mowgli” said Mother Wolf to her husband “He is a little frog because he has no hair on his body.” Mowgli is Little Frog in the language of the jungle. Mowgli stayed with the wolf family. The cubs grew, and Mowgli grew. He learned the language of wolves. He walked on two legs and he walked on four legs. He was a wolf. Every wolf is part of a family, and every family is part of a pack. A pack is a group of wolf families.

A pack is stronger than a family. This is the Fourth Law in the jungle.

Akela was the strongest, bravest, most intelligent wolf. He was the leader of the pack.

Baloo the bear was a teacher of wolves. Bagheera the black panther was a friend of the wolves. Baloo was a good teacher, and Mowgli learned the laws of the jungle and the languages of the animals. He went with Bagheera and he learned to run and to hunt. The years passed. But Shere Khan didn’t forget the man-cub.

One morning Bagheera took Mowgli to a village and left him there. “You Know the laws of the jungle.” he said “Now you must learn the laws of people.” Later, a woman found him. She took him into her house, and he lived with her family. Mowgli stayed in the village . He didn’t like it, but he was patient.

Be patient: this is the Sixth Law in the jungle.

Mowgli looked, he listened, he learned the Laws of People. He learned to look after the cows. He learned to look after the fire. Every morning Mowgli met his brother wolves in secret, near the village. They told him about the jungle. One evening, they told him Shere Khan was back. Mowgli decided to kill the great tiger. The next morning, Mowgli took the cows out as usual. He saw Shere Khan who ran to fight Mowgli. When the great tiger came, Mowgli hit the cows with fire. The cows ran towards Shere Khan. Shere Khan couldn’t escape. There were too many cows. They all ran forwards. The running cows killed the great tiger. Mowgli took the tiger skin back to the village. It was time for another wolf meeting. Akela was very old, and very tired. He was not the strongest wolf now.

He must die, and a new leader of the pack must come. This is the Eighth Law of the jungle.

Mowgli said: “Wolves! Don’t kill Akela. He is old but he is not bad. “Akela must die” said a wolf “It is the law of the jungle.”

“Wolves!” replied the boy, “I am Mowgli. I killed Shere Khan. I have the fire, I change the law!”.

And this is the real story of the Jungle book.

It started with blood, two dead people and a boy. And it finished with blood, a dead tiger, a living wolf and a boy who changed the laws of the jungle.